The Best Cast Iron Cornbread Pan will deliver a perfectly golden crust. There are many different varities on the market, some with an actual corn shape, other with a wedge like design. Luckily, they all make delicious corn bread. The cast iron construction will also ensure that it will develop a nonstick coating. This prevent your corn bread from tearing and makes it easy to remove. While there are quite a few manufacturer around, I highly recommend the one made in America. They are relatively affordable and generally last a lifetime.

This pan actually resembles that of a corn. You can pick it up individually and eat it like a french fries. They maximize the amount of surface area of the cornbread so if you like a lot of crust, this is the way to go. Plus it looks like little corn.

If you cant be bothered to cut the bread, then this pan has them pre divided. It comes with the extra benefit of extra crispy side. The only possible downside is unmolding them. It can be a little difficult with the lack of space.

For the real original corn bread pan, use the skillet. All you need to do is pour in the batter and bake. The center will be soft and creamy, while the bottom will have a nice golden crust. When you unmold it, it comes out in one giant piece. You can cut it to size. The great thing is that the pan can also be used for all sorts of other stuff.

Why Use Cast Iron for Corn Bread

Cast Iron has been used for centuries. They are one of the oldest cookware around. You can find some examples that are well over a hundred year old. One of the reason why people like it so much is because they are the original nonstick. As you cook in it, the seasoning, or nonstick coating gets better and better. If the cornbread is still sticking, just remember to butter it a bit before actually pouring in the batter. This should prevent the cornbread from sticking.

What most people seem to not understand is what exactly seasoning is. Some believes that its flavoring, when in reality its just polymerized fat. On top of giving the pan a nonstick coating, it also protects the cast iron from rust. If the seasoning is stripped, it can start to develop rust. Luckily, you can reapply the seasoning with relative ease. All you need to do is apply a thin coat of oil and bake it in a oven at 350 F for half an hour.

There really isn’t that much of a health issue with cast iron. If you see rust, you can strip it easily with sandpaper or a rust eraser. If it is particularly bad, you can always soak the rust in vinegar. It should strip it in a day or two.

There are some people who have a restrictive iron diet. For those individual, you should avoid eating food prepared in cast iron. There are no known issue with cancer with cast iron cookware. Except for maybe in the state of CA where everything causes cancer.

What Size Cast Iron for Cornbread 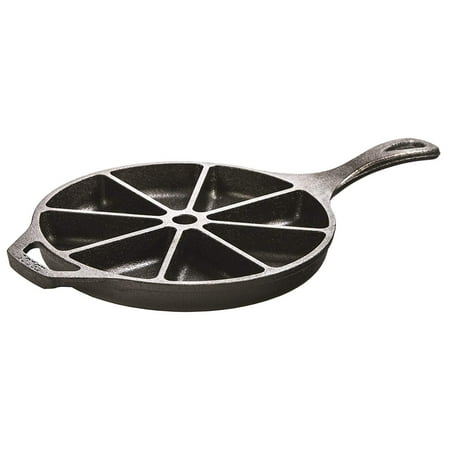 There really isn’t one size that is better than the other. Rather, you should bake cornbread according to its size. If you have a smaller sized one like the corn shape version, you should reduce the overall cooking time. For a full pan sized one, you should cook it at longer time to ensure that its cooked through.

There are a few varieties of Corn Bread pan out there. They all generally do a great job. However, what differs is the shape. I personally love the corn shape corn bread. Its fun for the family and the kids love it. You can also dip it in soups. If you dont like cutting corn bread, then the wedge one is great for that extra crispy crust. But for a pinch, you can always use your cast iron pan. You probably have one at home so you can always use that.

I hope you like this article on the Best Cast Iron Cornbread Pan, If you would like to see more, please visit our Pots and Pans Review page.