Cast Iron vs Carbon Steel Cookware, is there any difference? While they perform pretty much the same, the weight and composition affects how quickly they heat up. The biggest difference that the average user will notice is how much lighter carbon steel is. Compared to cast iron, you can expect carbon steel to be around half the weight. In terms of seasoning and nonstick ability, they are pretty much comparable. They also both face rusting issue. This article will take a closer look at what these similarities and difference means.

However, it is the way that they construction the cookware that makes a difference. As stated before, carbon steel is usually half the weight of cast iron. This also means that it heats up a lot faster. In my past test, I heated up a piece of toast for 2 minutes. One was a carbon steel skillet by matfer bourgeat and the other a cast iron skillet by lodge. Both used the same burner and same testing condition.

At the two minute mark, the toast by Matfer Bourgeat was already browning. 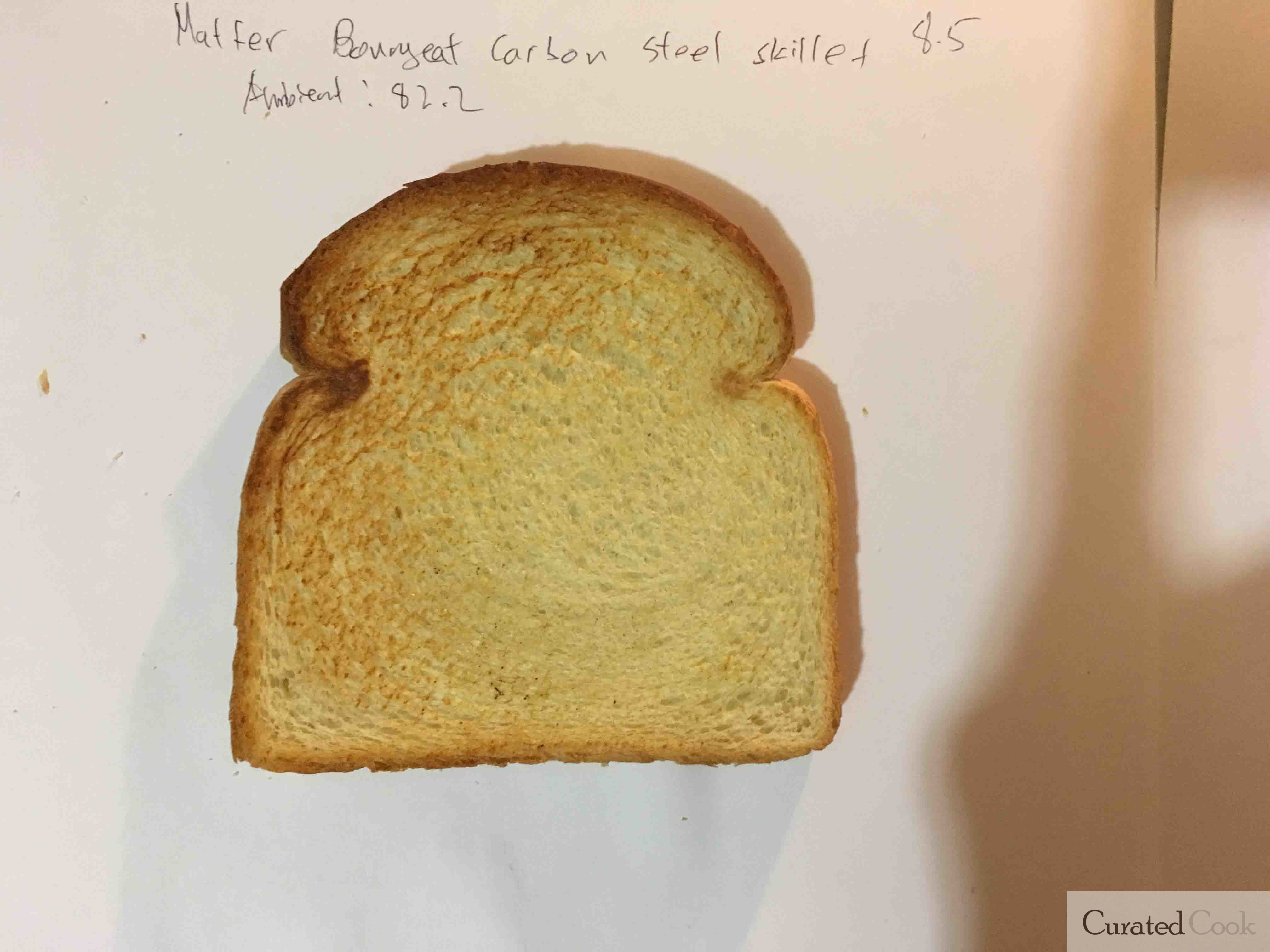 However, on the cast iron skillet, it was still blonde. 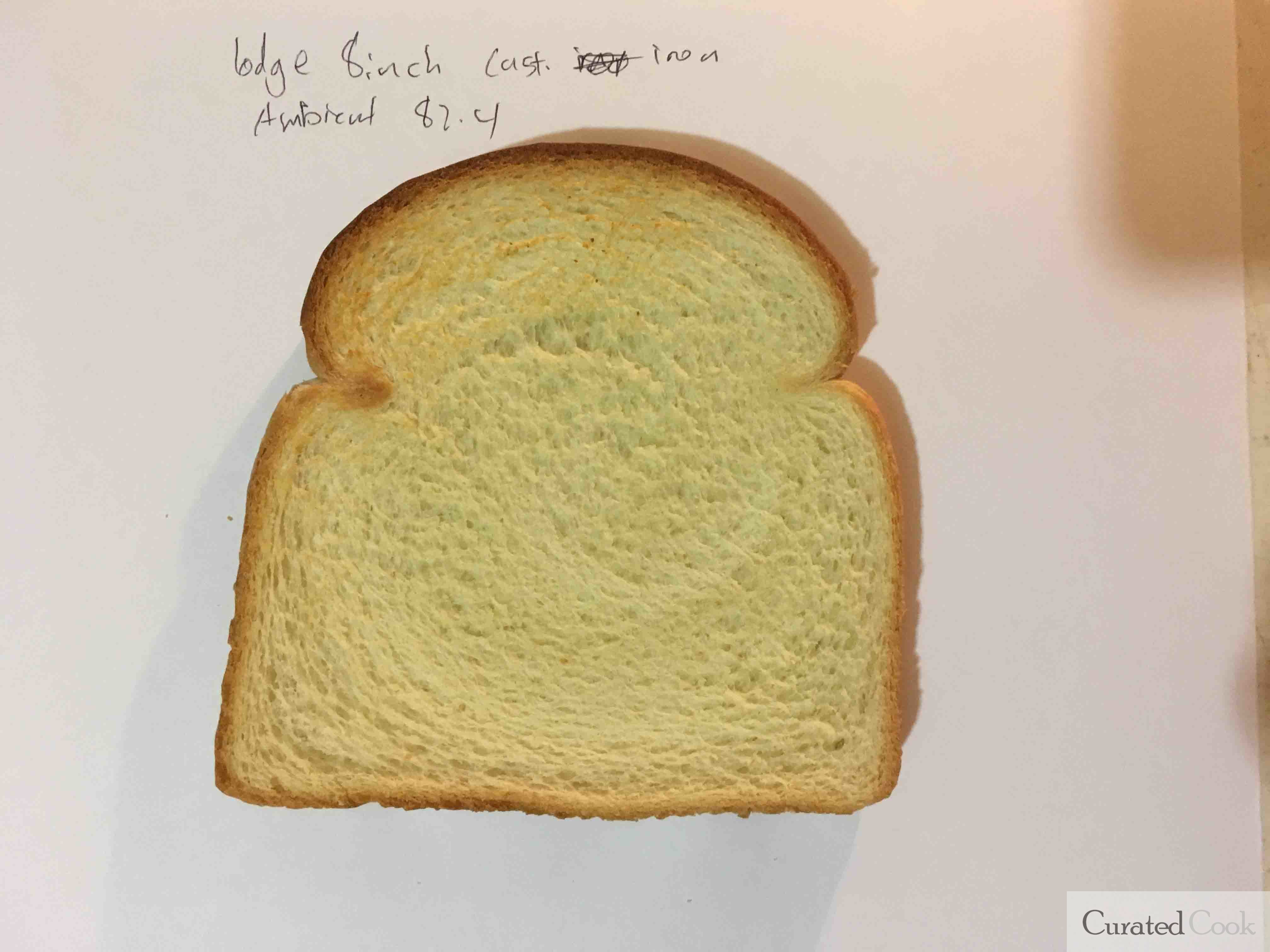 To check to see if the heating pattern in the same, I got a 10 inch skillet by lodge. This time I heated the pan up to 3 minute.

Both the cast iron skillet and the carbon steel skillet show the same heating pattern. Which pretty much correlate to the thermal conductivity chart above.

Contrary to popular belief, a seasoning on a pan has no flavor. Rather its a polymerization of fat on the porous metal surface. As you cook in it, this seasoning builds up and produce a nonstick coating. This coating prevents the pan from rusting and gets dark with use. Both type of cookware can take on the same seasoning. Today, most cast iron cookware comes preseasoned from the factory. This was pioneered by Lodge and sales few as a result. Where as carbon steel comes with a beeswax or other type of coating. They need to be stripped and seasoned before first use.

In terms of nonstick ability, they should be about the same. However, one key difference is that carbon steel pan still comes with a smooth texture. Where as modern day cast iron comes with a pebbly texture. The reason for this is because they pre season the pan from the factory. Supposedly, a rough surface makes the seasoning stick better.

There are some cast iron collector out there who claims that a smooth surface makes food more nonstick. They typically hunt for those vintage cast iron cookware because the surface is smooth. However, if you think about it. It is the seasoning that makes the pan nonstick, not the surface. It would benefit the average user to have a pan that holds onto a seasoning better.

The process for seasoning your pan is the same for both. Some prefer to use flax seed oil to season their cookware but shortening or canola oil will work just as well.

There are many different way to season your pan. One popular method is to do a light coating of oil and bake the pan in the oven at 375 Degree Fahrenheit for 30 min – 1 hr. Another popular way is to just fry potato peel with salt a oil. Repeating the process will make the seasoning better.

Caring for the seasoning

There are a few things you can do to protect the seasoning of your pan. First, do not wash it with soap. That will just increase the chance of you stripping it. To clean your pan, you can just rust salt with a paper towel. This sediment will rough it out. Or you can deglaze the pan.

Second, overheating the pan can destroy the seasoning. For this reason, I recommend one for regular cooking and another for searing.

Handles are a odd thing as well. It seems like all the carbon steel cookware uses an industrial like long handle. It is uncomfortable but durable. Some comes welded on with no rivets and other with rivets. However, rivets make little difference in these pans. The main reason why people want a rivetless design is because its easier to clean. But the reality is that, cleaning is a bit different than your average pan.

On cast iron cookware, they are usually a single piece with the pan. Since they are molded casted of stamped, they do not have make a separate handle. They can just make it in the same sand mold. They are usually short and generally more durable. Which one is better is hard to say. But I personally find the cast iron one to be better.

While both cast iron and carbon steel perform pretty much the same, their composition and construction is different. Carbon steel is great if you want a lighter weight pan. They are great for general cooking like stir fry or sauteing. However, for searing food like steak and salmon, cast iron is the way to go. You should choose one that suits your need.

I hope you enjoyed this Cast Iron vs Carbon Steel Cookware article. If you would like to see more, please visit our Pots and Pans Review page.

One Comment on “Cast Iron vs Carbon Steel Cookware”

[…] you want more information about the difference between cast iron and cast iron, check out myCast Iron vs Carbon Steel Cookware […]