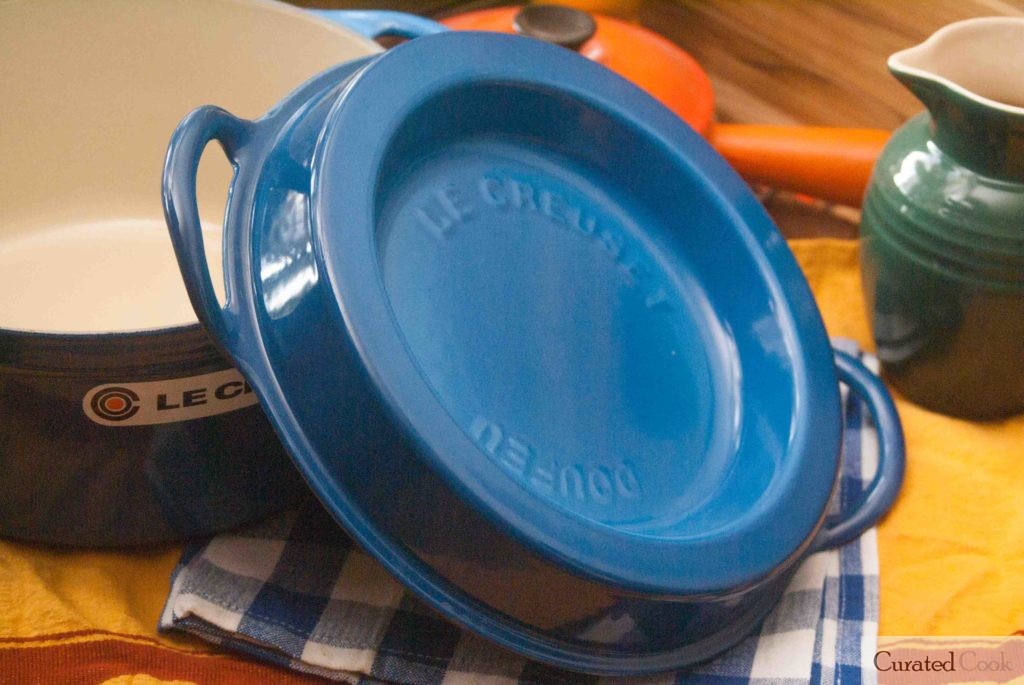 Why is Le Creuset so Expensive? The answer to this is pretty long winded. Le Creuset is actually a relatively new company. Le Creuset was started in 1925 by two Belgium men. One was a enamel specialist and the other was a casting specialist. They used their combined knowledge to make their very first enamel dutch oven. As time went on, so did their brand recognition. However, If you compared it to other french manufacturer, they are about one hundred years younger to companies like De Buyer and Mauviel. You might wonder why are they so famous compared to the other brands? It is thanks to Le Creuset aggressive marketing campaign and business tactics that made them into what they are now.

As Le Creuset started to gain market share, they started to take over rival cast iron manufacturer. One big company was Cousances. Cousances was a French Cast Iron manufacturer that was started in 1553. Although I am not too sure on what lead Cousances to their demise, one rumored reason was because of the range of colors. They simply lacked the options and variety that Le Creuset had. Le Creuset was the company to choose if you wanted to customize your kitchenware to your home.

Another company at that time that was bought out was Descoware. One of the key point that their cookware had was its lightweight construction. No more heavy lifting from cast iron cookware. They had colors and vibrancy that Le Creuset had as well. One of Cousances most popular color was the orange flame. Very similar to the offering that Le Creuset had. However, because of supposed bad market condition, they had to sell their company to Le Creuset.

Today, you can actually see some of Cousances and Descoware product incorporated into Le Creuset main line up. One such thing is the Doufeu. The Doufeu dutch oven was actually pretty common under the Cousances brand. Another is the Le Creuset Heritage Bakeware. That shape and design closely resembles cousances offering of that time.

Pretty soon, there were little to no competition that Le Creuset had. Their aggressive marketing and business tactic lead them to the number one place in the cookware industry. Their name had been synonymous with quality. Today, there are many different manufacturer that tries to compete with Le Creuset. However, only one company comes close, Staub.

They too are a French manufacturer of cookware, but their history is still relatively short. Having started in 1974 they do not command the same prestige that Le Creuset has. They like Le Creuset offer a wide range of colors. And in my personal opinion, a more attractive one as well. They are deeper and richer in color. But that is just my personal taste.

Other lesser manufacturer will produce enamel cast iron cookware, but those pail in comparison with Le Creuset. Their style, colors, fit and finish and durability simply do not lack what Le Creuset has. They are typically made in China and prone to chipping and wear. The good thing is that their performance is about the same of Le Creuset for a fraction of the price.

Yes and No. Granted this is purely my opinion, but for the average consumer, they wont be able to tell. At the base of any Cast Iron Cookware is cast iron. The property of cast iron metal will be the same. You cannot change the basic thermal conductivity of it. While the formula and manufacturing might be different, the end result is very similar. What this means, is that if you compare cooking performance between a Chinese Dutch Oven and le creuset, they will perform pretty much the same.

However, there are differences in the general design and construction of the cookware. Things like the durability of the enamel, the size of the handle, the thickness of the cast iron and even the styling of the cookware. Those are all what makes each company different. And this is truly where Le Creuset Shines.

Through the year, Le Creuset has managed to get the design of their Dutch Oven to be Perfect. Their handles are on average larger and more comfortable than the competition. Whether you have a glove on or not, you can always get a secure grip on their handle. Other manufacturer like Staub, while good, does not give you that same grip.

The thickness of the cast iron is also well balanced. They tend to be a little more thinner than other manufacturer. While at the same time, giving more capacity than the competitor. This is a balance of design and performance. They sought to see what benefits most to the average consumer. Granted, some might like heavier and thicker cast iron, but it is their insight to the general consumer that sets the apart.

Finally, the colors. The color is what makes Le Creuset number one. While it is vain, we do buy things because they are pretty. Like clockwork, le creuset release new colors annually. Things will also go out of production after a while. This makes consumer keep on buying their product even if their old one is still good. Much like Apple releasing a new iteration of the phone consumers want it and manufacturer knows it. So why lower the price if people are buying it?

Although to be fair, Le Creuset has one of the most durable enamel out there. My Chinese Dutch oven came chipped from the store. While I have pots that are over 50 year old from Le Creuset that looks perfect.

Why is Le Creuset so Expensive and is it Worth it?

It is a combination of all these factors that make Le Creuset so expensive. Their marketing, their design, their color and their fans. All of this lets them charge that heavy price. And people buy them, I certainly did. But is Le Creuset Worth It? That depends on you. For the average consumer, most wont see any difference. The only thing that they will see is the name and the color. However, for experienced cook, they will enjoy the wider handle and lighter construction. But if you buy Le Creuset for performance, you will be disappointed.

I hope you like this Why is Le Creuset so Expensive? article, If you would like to see more, please visit our Article page.