All Clad has slowly became one of the biggest cookware manufacturer in the world. They revolutionized the cookware industry with their introduction of the fully cladded cookware. Using roll bonding technology, they combined the best properties of different metal into one. Unlike disc bottom cookware, thickness is uniform from the base to the rim. It has become a symbol of quality cookware. All Clad Copper Core set sits on top that throne. Using a combination of copper, aluminum and stainless steel, it provides performance that is unrivaled.

Is All Clad Copper Core Worth It?

All Clad Copper Core is top of the line in their series. What it has over the other model is the copper layer. This means that the pan conducts heat better and be more responsive. As a result, you can control the heat better. This means that its better for more delicate stuff like sauce. However, this does not mean its the best. The downside to the excellent heat control is weight. Since its more responsive, it can also lose heat faster.

If you compare it with the d5 line, that thing is heavy. Its designed to hold heat like cast iron and sear meats. While the copper core can do the job adequately, the d5 line is more suited.

The d3 line uses three layer instead of 5. Its considered to be the base line of All Clad cookware. It does the job but it lacks some refinement like rolled lip or heft. The good thing about this line is that its in reach for most people. Making it the best value of the line up.

If you were to compare the d3 vs d5 vd copper core. I will say that the copper core is the best all rounder. Its good at almost any task and its the quickest to heat up. However, it will lag behind the d5 in terms of searing. Its also the most expensive. If you just want to sear food, the d5 line is better for you. Its cheaper than the copper core but its not as responsive. If you just want all around good pan without the price, than the d3 line would be better.

All Clad Copper Core Set is one of the best pans that I have used. To see how it performs, I conducted experiments to gauge how it performs. To see the heat distribution, I used a piece of toast and a weight. If you look at the picture below, the heat distribution is almost perfect with not heat spots. Judging by the color of the toast, you can see that it heats up very quickly. This was the result after only 2 minutes. 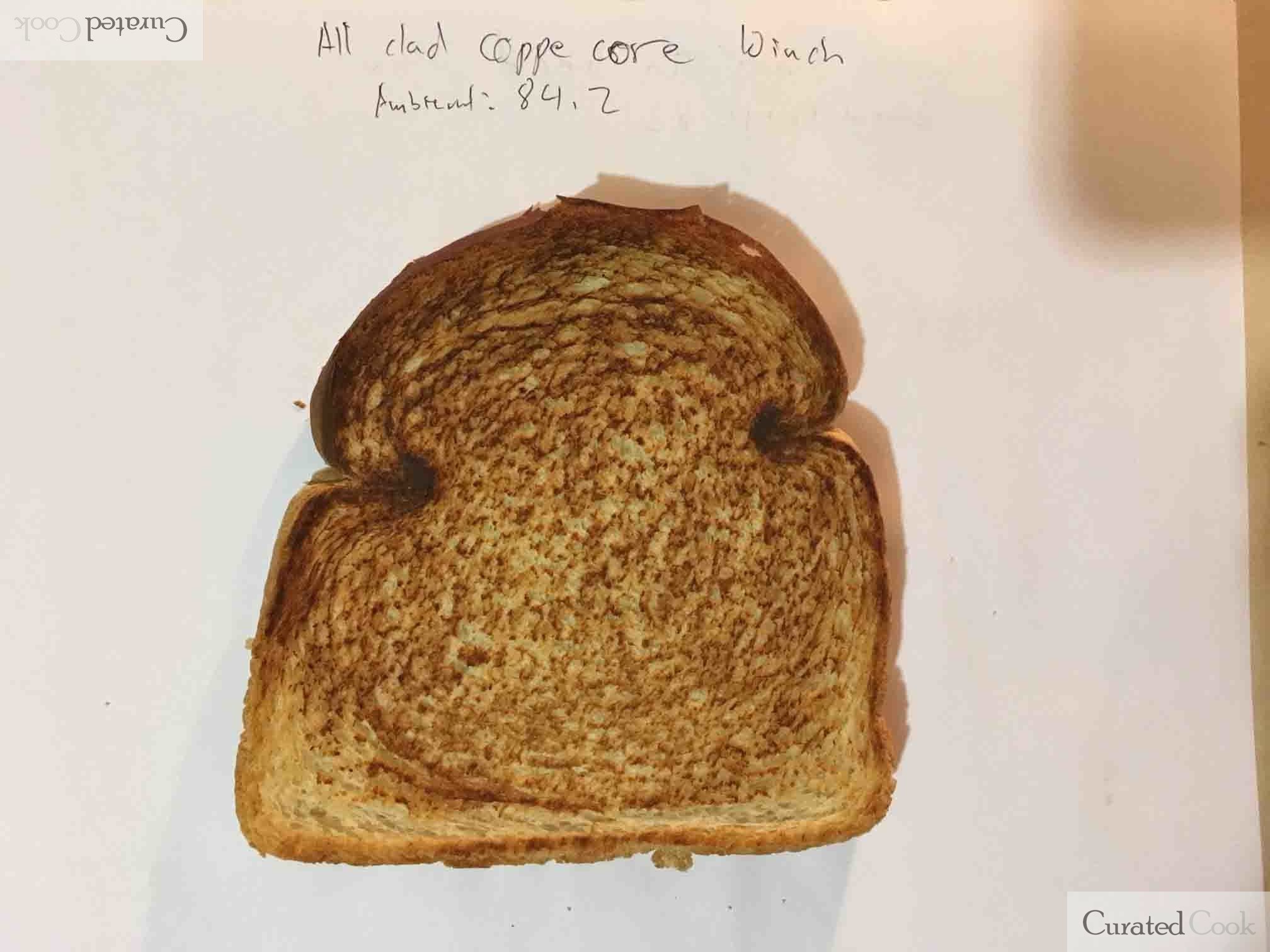 Now compare this to Le Creuset Skillet. I did the same experiment but extended the time to three minutes. You can see very obvious heat spots. The shade is also not as dark as All Clad. 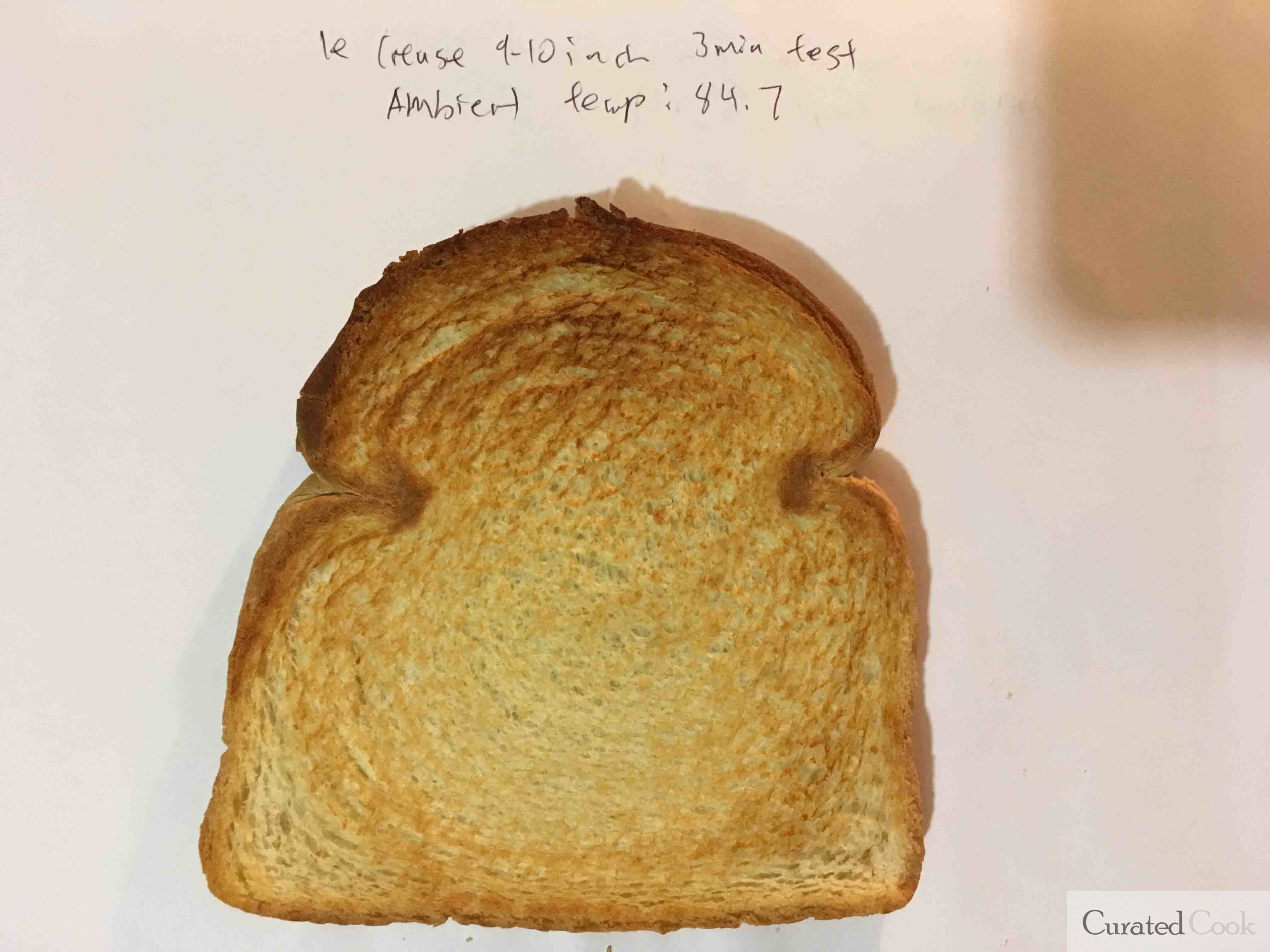 If you’re curious as to how well a D5 Skillet will perform look at the image below. You can see obvious heat spots. It also heats up slower. Be aware that this test was done on the 8 inch skillet with a nonstick coating.
But it wouldn’t surprise me if the result was even worse on the ten inch model. 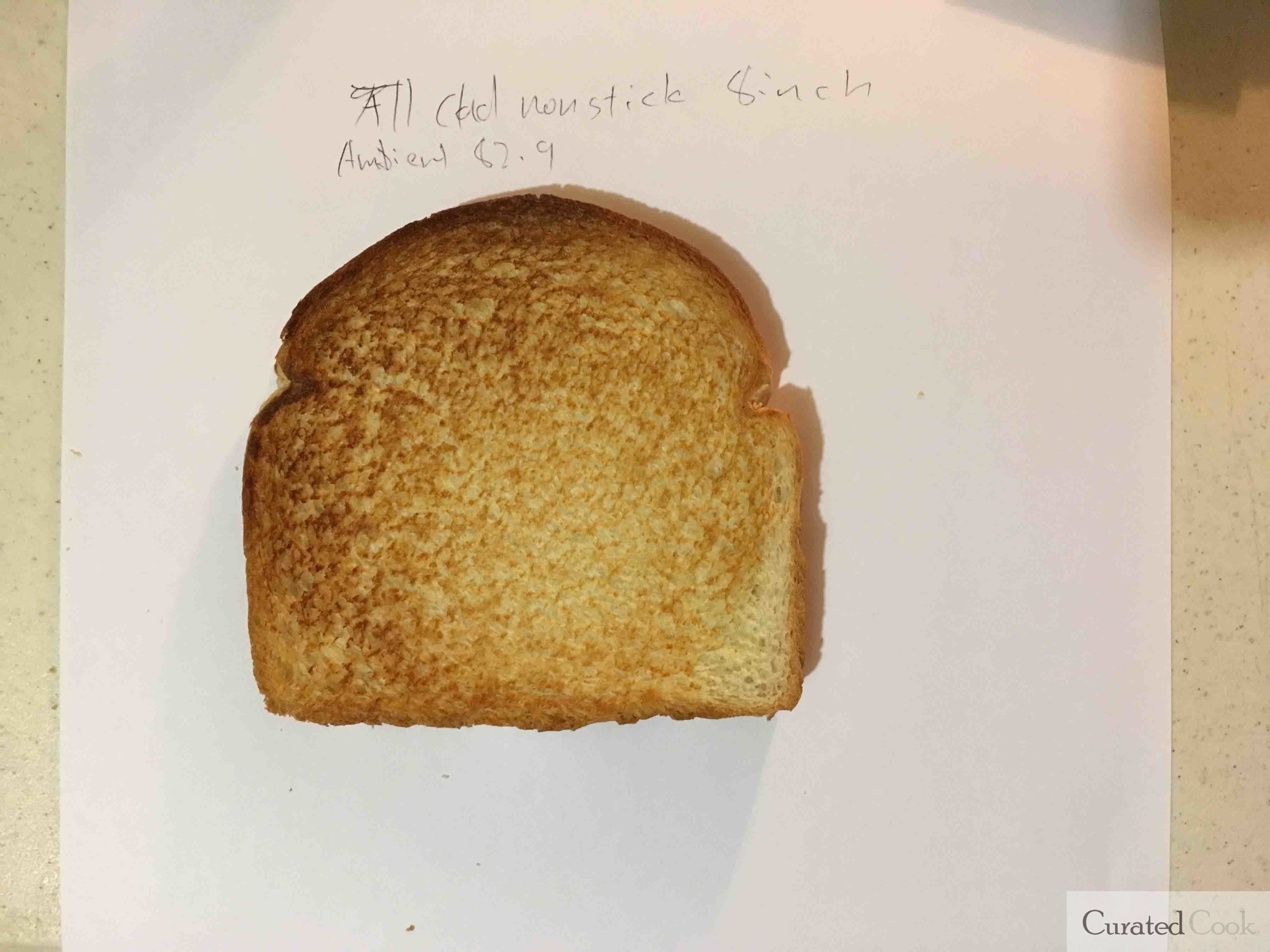 In terms of design All Clad Cookware are some of the best around. Their skillet has low flaring side with rolled lip. This makes it easy to flip food and sear meats. The sauce pots are more wide than tall, meaning that its not cumbersome to move food around.

With all their innovative design, their handle is one of the worst in the industry. Lots of people hate it with a passion. Some will even avoid it all together due to it. The cup like design will dig into your hand causing discomfort. Its not much of a issue in short burst, but cooking for long period can cause soreness. People with arthritis will be affected more as well.

For years, they have been stubborn and just refused to redesign it. But lately, there has been some improvement. It has gotten more round and less sharp. Its not perfect, but its in the right direction. 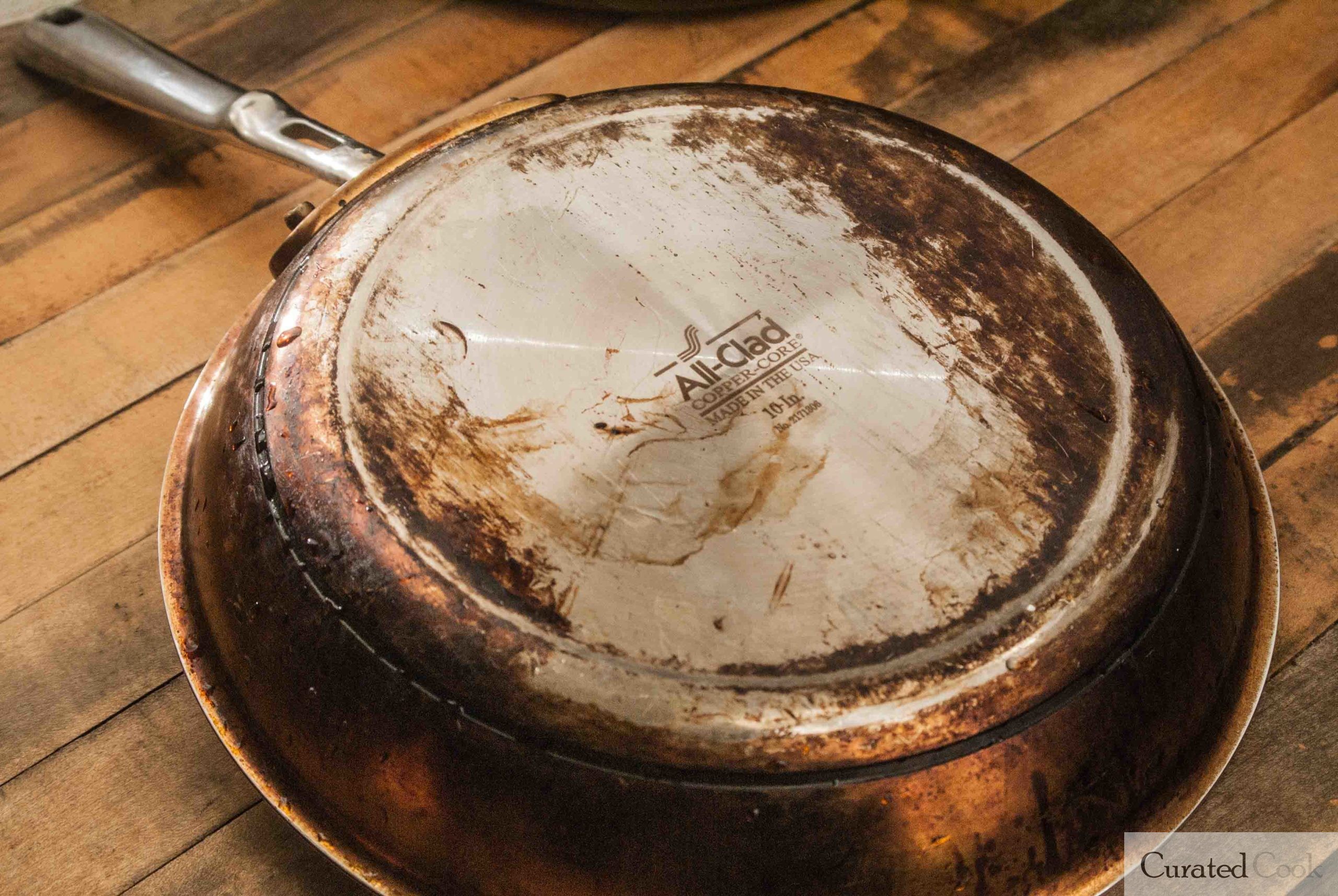 Cleaning is perhaps one of the most annoying aspect of Stainless Steel Cookware. They smudge and get water marks. After a while, that beautiful mirror polish will dull. Oil stains will also start to build up. My advice to you is to just dont think about it. As long as the interior is clean, it wont affect cleaning. If you only knew how cast iron looks like bare, you will most likely shudder thinking about it.

If however you want it sparkly clean here are some tips. For tough stuck on stain, soak it in white wine vinegar. The longer you soak it, the easier it is to clean. For minor blemish, barkeeper friend will remove most stain.

As for regular washing, just use soap and a sponge. It should do the trick.

Pitting is a serious issue with stainless steel cookware. It is minor gouges in the inner layer of steel. It usually occur when salt crystal get stuck on. I personally have experienced it with my beloved saucier. I didnt let the water reach a boil before adding salt. The end result is that little holes are in the interior of my pan…

You can reduce the chance of this occurring by only adding salt after water gets to a boil. Also, never let salt sit empty in the pan. Always add some sort of food. You’ve been warned…

The All Clad Copper Core Set is one of the best cookware in the industry. Its the most responsive and one of the most well designed. The downside is that its also one of the most expensive. The d3 and d5 line are both more affordable and usable. Whether you need the responsiveness of the copper core line is up to you. I personally like it and have quite a few of their pieces.

Thinking about Demeyere, check out our article on All Clad vs Demeyere.